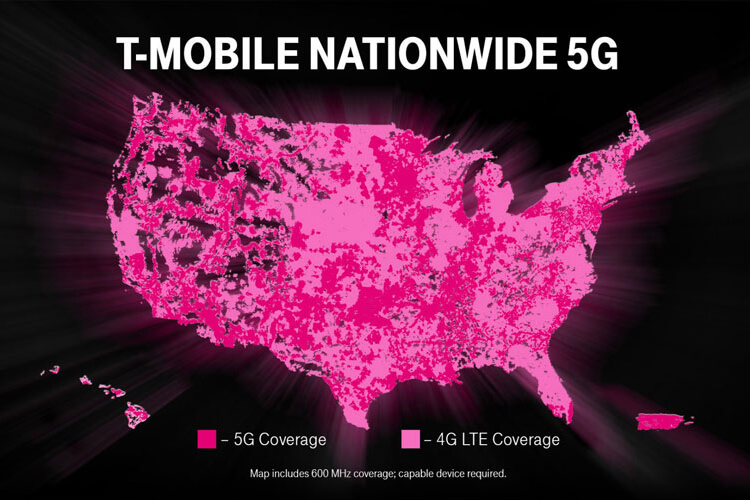 Well it’s official, America’s FIRST 5G network is finally live as T-Mobile lights up their 5G networks with a slew of firsts! The first nationwide prepaid 5G carrier with Metro by T-Mobile and the first carrier to have 5G devices that connect to 5G networks across the nation. This is one of those “one small step for man” moments as this a revolutionary step forward into ushering in a new 5G powered world that brings about more accessibility and affordability for all Americans to be on 5G with the New T-Mobile.

The hype is worth all the chatter as 200 million people across 5,000 cities and towns across the U.S. are now blanketed in 5G coverage.  This move makes T-Mobile the nation’s largest 5G network, covering 1 million square miles- including rural America.

While today is a big day for T-Mobile, it’s just the start as the pending merger with Sprint still looms in the air and is hoped to be wrapped up by the end of 2019, early 2020. Once the merger closes, T-Mobile will be able to take their 5G network to the next level.

The speeds won’t be the super-hyped 5G speeds that everyone has been raving about, as T-Mobile’s initial 5G launch strategy utilizes the 600 MHz spectrum on the low-band. Carriers like Verizon and AT&T are building on the high-band spectrum.

A T-Mobile spokesperson told The Verge, “In some places, 600 MHz 5G will be a lot faster than LTE. In others, customers won’t see as much difference.”

The raved about 5G speeds such as theoretical peak speeds of 20 Gbps, come on frequencies that are on the high-band spectrum. The high-band spectrum that all carriers will utilize for their 5G networks, require small cell towers and a huge infrastructure overhaul. High-band spectrum frequencies are powerful and pack a punch, but have trouble traveling far distances and can be easily disrupted by trees, buildings and other structures.

Because T-Mobile’s strategy is different than its competitors and relies on the LTE-like spectrum, the Un-Carrier is able to deploy a 5G network that covers huge parts of the country, giving them the bragging rights as the nation’s first 5G nationwide network and claim nationwide 5G coverage.

T-Mobile will eventually roll out the high-band spectrum technology, or also known as mmWave technology for its 5G network- but there’s been no official announcement yet on whether it’s going to expand outside its current cities.

T-Mobile’s outspoken CEO, John Legere had this to say regarding the rollout of their 5G network. “5G is here on a nationwide scale. This is a HUGE step towards 5G for All.”

Legere continued, “While Dumb and Dumber focus on 5G for the (wealthy) Few, launching in just a handful of cities — and forcing customers into their most expensive plans to get 5G — we’re committed to building broad, deep nationwide 5G that people and businesses can access at no extra cost with the New T-Mobile … and today is just the start of that journey.”

According to T-Mobile’s press release, the 5G network isn’t just bigger, it’s better and here’s how:

Neville Ray, T-Mobile President of Technology said, “The carriers have been over-hyping 5G for years now, setting expectations beyond what they can deliver. When Verizon says #5GBuiltRight, they must mean sparse, expensive and limited to outdoors only.” Ray then went on to say, “Meanwhile at T-Mobile, we built 5G that works for more people in more places, and this is just the start. With the New T-Mobile, we’ll see 5G speeds follow the same path as LTE, increasing exponentially over time. Plus, real broad and deep 5G will unleash whole new categories of innovation that will touch almost every area of the economy. The 5G future is bright, and it starts today.”

T-Mobile has published an interactive 5G map so you can see exact 5G coverage, down to the neighborhood.

Starting Friday, December 6th T-Mobile will begin selling the OnePlus 7T Pro 5G McLaren for $899.99 and the Samsung Galaxy Note 10+ 5G for $1,299.99, both available on monthly installment plans in case you don’t have a few extra hundred dollars to drop on a new 5G phone. Both phones are capable of connecting to T-Mobile’s 600 MHz network, but do not support the mmWave technology. However, once the pending merger with Sprint goes through, all customers connected to T-Mobile’s network using these phones will see a performance boost.

Even though the network has officially launched, no one can actually use it until December 6th. It’s exciting to see this next massive step in wireless technology and we’ll be waiting anxiously as the other carriers follow.