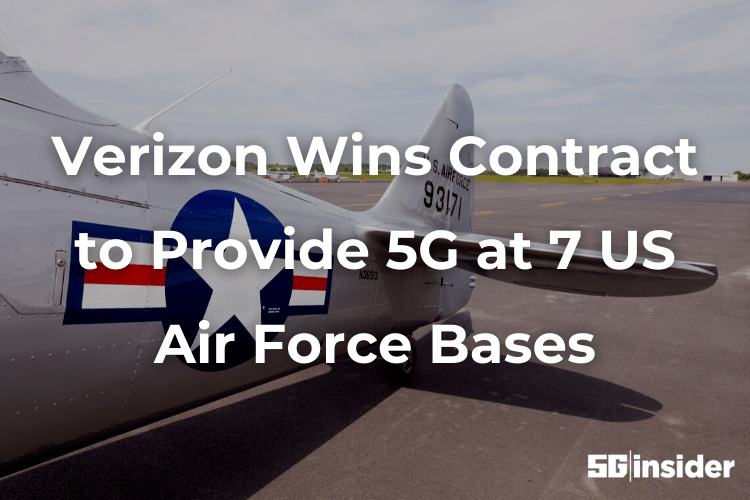 It seems Verizon is on a roll and closing lucrative deals one after another. Just last week Verizon announced a 10-year deal with the NFL and this week the company announced that it’s been picked by the Department of Defense (DoD) to install 5G connectivity at seven U.S. Air Force Reserve Command (AFRC) bases in California, Florida, Massachusetts, New York, Ohio, Pennsylvania, and Texas.

This latest deal between the federal government and Verizon isn’t a new one. In 2019 Verizon secured a deal under the government’s Offer to Lease (OTL) program to amp up wireless connectivity at 10 Air Force bases, including a 5G network at Tyndall Air Force Base in Florida. There was also a deal for a $495 million contract with the DoD to provide network services to support critical research in June 2021, as well as a $78.8 million Enterprise Infrastructure Solutions (EIS) task order for Verizon to modernize services to the Air National Guard (ANG) Readiness.

Each base will be receiving outdoor C-band connectivity to deliver 5G service for both people located on the base and surrounding communities. A Verizon spokesperson said there will also be a mix of 4G and 5G mmWave frequency indoors in certain areas. Both methods will significantly enhance wireless coverage across the deployments and deliver a better experience all around with faster speeds and low latency. Verizon said the install would, “higher speeds, increased bandwidth and lower latency for the base personnel and the surrounding community.” The carrier will use 5G radio access network (RAN) vendors to deliver its network on select bases.

Currently, Verizon’s Ultra Wideband network (mmWave) is available in parts of 82 cities and the carrier is expected to turn on C-band spectrum for 5G sometime later in 2021 or early 2022 to 46 markets.

The Air Force is looking to help the U.S. Military as it looks to grow and digitize operations. Things like animated simulation and training, full-motion HD video for telemedicine, and ultra-fast AI for biometric identification.

Jennifer Chronis, a senior VP for Public Sector at Verizon said of the partnership, “Serving as an indispensable partner to the military and their strategic digital transformation objectives is one of our highest priorities,” she continued, “Air Force leadership describes their modernization as a transition from an industrial-age force to an information-age force and Verizon Public Sector is their partner in that journey, providing a 5G network with the right technology solutions to meet their needs today, and into the future.”