Skip to content
5G Insider > Carriers > When Will 5G Be in My Area? 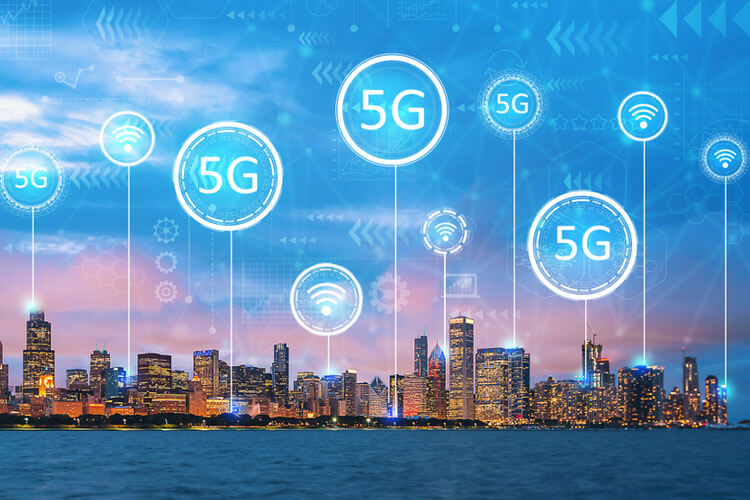 5G is the fifth generation of wireless technology that’s poised to bring about the fourth industrial revolution. With blazing fast speeds and low latency, 5G will power a new world of possibilities and open doors for new ones we haven’t even thought of yet. The biggest question, when will 5G be in my area? 5G rollouts have already started in certain areas in major cities in 2019 but expect to see more nationwide coverage in 2020 from carriers like Verizon, AT&T, newly merged T-Mobile and Sprint, and the newest wireless competitor, DISH Network.

Let’s back up a bit and quickly explain what 5G is and why it’s so special. Wireless technology functions on a multi-band spectrum of low, mid and high bands. 3G and 4G have primarily used low and mid-band frequencies to connect your device to the world around you. So for example, when you send a video or stream a show, that’s all done using the frequencies on the spectrum. As our world and technologies grow, so does our demand for more bandwidth on this spectrum. This is important because for things like autonomous cars to work, cars need to be able to connect with each other almost instantaneously with low latency and high data transfer speeds. Enter 5G. 5G uses frequencies on an untapped high-band spectrum that deliver speeds up to 20 Gbps, and a 1 millisecond latency. To put this in perspective, 4G LTE has peak speeds of 1 Gbps and a 20-millisecond latency- so 5G is almost twenty times faster than 4G. Instead of just hanging out on the low and mid-band spectrum, 5G will utilize all three bands on a multi-band spectrum strategy clearing up the traffic on the other bands, making connections faster and more efficient than ever before.

To make 5G a reality across the U.S., there’s a ton of work to be done by the wireless carriers. Building out a 5G network is a major investment because it’s going to require a huge overhaul of current wireless infrastructures and the building out of new ones. Like in 2010 when 4G first rolled out, it’s going to take years before 5G coverage blankets the United States. So when will it come to you? Well, it depends on where you live.

AT&T, Verizon, T-Mobile and Sprint have been heavily focused in dense metro areas as they’ve deployed out what we’ll call beta tests of their 5G networks, and not full deployments of their final product. DISH Network has not deployed their network just yet but will be required to have 5G coverage to 70% of the U.S. by June of 2023. Below is a breakdown of what cities currently have 5G hotspot coverage broken down by carrier, and which ones can expect it soon.

A quick note: Just because you see your city listed doesn’t mean you have 5G. While 5G is incredible and worth all the hype, it does have some drawbacks. The frequency that 5G runs on is so concentrated and powerful but can only reach so far. Carriers will need to work through this growing pain by installing small cells (mini cell towers) across various locations for optimal coverage. In addition, you’ll need a 5G capable device to access this new network.

*If you are a current AT&T customer and have seen ‘5GE’ displayed on your phone, you do not have 5G. 5GE stands for “5G Evolution” and is actually just a faster version of 4G LTE Advanced.

T-Mobile and Sprint merged officially as of April 2020 and will conduct business under the T-Mobile name. T-Mobile was one of the first carriers to debut 5G nationwide coverage in December 2019 using the sub-600Mz spectrum. This low-band 5G coverage won’t deliver speeds as fast as what users can find on the mmWave, but it’s a start.

T-Mobile does have mmWave coverage available in just a few select cities:

We’re all anxious to get our devices connected to this new network, and honestly who can blame us? Each carrier’s 5G rollout will be entirely dependent on population, infrastructure and most importantly, cost. 5G deployment will most likely continue to spread in major metro areas and slowly spread across outer city limits into the suburbs and eventually make its way into more rural parts of the country. The FCC is putting pressure on the various carriers to bring better internet options to rural America since most rural parts of the country are still on DSL and running very slow internet compared to the rest of the nation. Just because 5G isn’t in your area immediately, doesn’t mean you won’t see the effects of it. You’ll still find improved speeds and lower latency than you had before, it just won’t be the full 5G service. It’s going to take some time, but 5G is coming to your area.