Skip to content
5G Insider > FAQ > What Are The Different 5G Spectrum Bands? 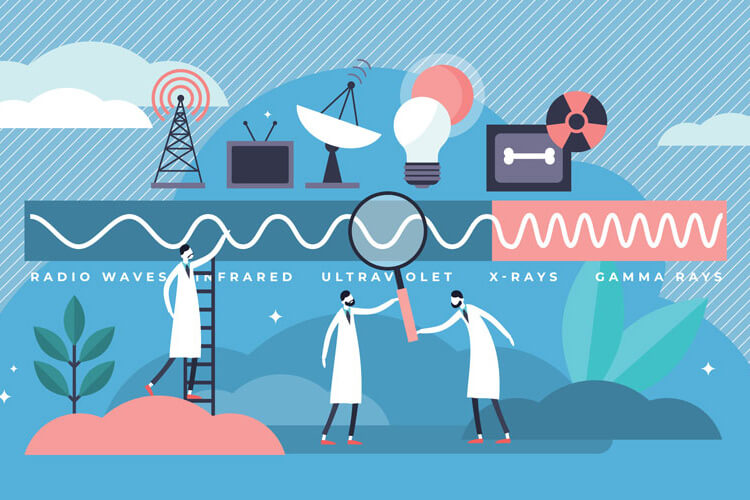 5G has been the biggest tech buzzword in 2020 and for good reason: it’s blazing fast. You can’t turn on the TV without hearing about T-Mobile or AT&T’s nationwide 5G coverage or that Verizon’s Ultra Wideband Network going live in your city. Something a lot of consumers don’t think about (and why should they, it can be complicated) is that each network is different because of the real estate of spectrum on which they operate on.

In a nutshell, 5G operates on a multi-band spectrum strategy to deliver your wireless speeds. The band in which your phone connects will determine your speeds and connectivity range. Let’s break down what the spectrum is and the differences between the low, mid, and high bands.

What is The 5G Spectrum?

Oftentimes when you hear 5G wireless connectivity, you think about how fast your phone could be or the cool technologies like self-driving cars that come along with it. But what about how it works? Wireless technology uses what’s called a spectrum, which is basically invisible radio frequencies that wireless signals travel over and is the lifeblood of the wireless industry. The spectrum isn’t limited to just your phone, everything you do operates on the spectrum, the TV you watch, the GPS apps on your phone, to making phone calls or checking social media- all use airwaves on the spectrum.

The spectrum is broken down into three pieces, low, mid, and high band spectrum. These various “bands” refer to the speeds and distance in which these frequencies can travel.

What Is Low-Band Spectrum?

The low-band spectrum is anything that operates below 1 GHz. A lot of the 4G connectivity that we know operates on the low-band. When you think of frequencies on the low-band, think of large waves with great distances between each of the peaks. Though slower, these bands can travel great distances making them an ideal choice for more rural areas. The 6000 MHz low-band spectrum is a great place for 5G connectivity to start.

So when you hear T-Mobile and AT&T promoting their 5G nationwide coverage, it’s built on the low-band spectrum.

What is Mid-Band Spectrum?

Mid-band spectrum is the best of both worlds when compared to the low and high-band. The low-band can travel great distances, but the speeds it delivers is a bit more limited. Mid-band runs between the 1 GHz and 6 GHz spectrum and is generally ideal for 5G connectivity. This is because it can deliver faster speeds while also still covering significant distances. In the future, you’ll likely see a lot of 5G networks built off of a mix of the low and mid-band spectrum, which are still notable improvements over the current 4G networks we know today.

What is High-Band Spectrum?

Each carrier is using a multi-band approach to deliver their 5G approach and that’s good news for consumers because it gives us improved speeds and better access to 5G speeds. Regardless of where you are, 5G connectivity will be possible and undoubtedly an improvement from the 4G LTE speeds we’ve come to know over the past decade.