Skip to content
5G Insider > FAQ > What is 5G and What Does it Mean? 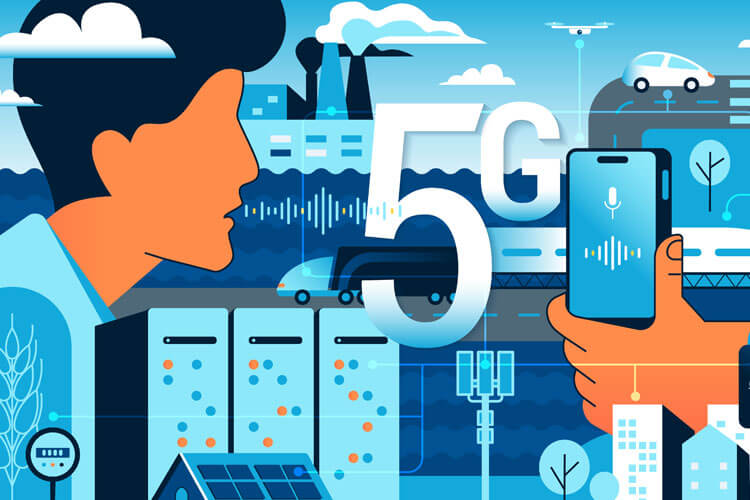 5G is the next generation wireless technology and is definitely something you’ll want to know more about. It’s an absolute game-changer and is going to revolutionize the way you live every day. It’s more than just downloading an image faster on your phone or loading a video without the buffering; 5G opens our world to futuristic possibilities that we only fantasized about in movies or on television. Think smart appliances, smart cars, smart cities, think big things!

5G in itself is the “fifth generation” in wireless technology and the next step above its predecessors of 4G, 3G, 2G and 1G. 5G will deliver faster speeds, lower latency and a more efficient network capacity. To better understand just how revolutionizing 5G is to our world, it’s best to know where we started.

5G is where we’re heading. Unlike previous generations, 5G will run across multiple band spectrums compared to just one low-band spectrum. Why does this matter? Well, just about every device is plugged into the low-band and lower half of the mid-band spectrum. And when we say devices, we’re not just talking phones. It’s all tech that uses an internet connection. With so many devices on one spectrum, this results in slower speeds, increased latency and more network congestion. This is where the 5G magic happens. Because 5G will also utilize higher mid-band spectrum and high-band spectrum (fancy talk for different wavelengths), it creates space for multiple devices to connect with lower network congestion. This will power a rise in smarter technology because the network infrastructure can actually handle bigger amounts of data transfer needed to make even bigger ideas happen.

Ways 5G will affect your everyday are:

5G has yet to fully roll out across the globe, but the world is already abuzz of the possibilities 5G could bring to our society. The examples listed above are just a few of the ways 5G will bring about massive change to technology, industrial, medicine and more.

How Does 5G Work?

5G will work by using radio technology in a more efficient and faster way. For perspective, 4G operates on a low-band spectrum that produces frequencies of 600 megahertz to 6 gigahertz. 4G has become inefficient for our modern-day technologies is because there is a lack of speed with increased latency. 5G will utilize higher band frequencies (mid and high spectrum) that can go from 24 gigahertz to 86 gigahertz. 5G will effectively increase your speed, lower latency and generate more network data capacity.

Depending on which carrier you go with, 5G carriers will utilize existing, transformed cell towers or groups of small cells to deliver the performance you’d expect from 5G. Small cells are mini versions of the cell towers we’re all familiar with, installed across your city.

5G is about twenty times faster than 4G. 4G has a peak speed of 1Gbps and 5G is expected to deliver 20Gbps. Depending on where you’re located, speeds can vary but the average, everyday speed for 5G will be 100 Mbps, compared to 4G at 16.3 Mbps. Whether you’re in rural America or in the middle of a dense, metro city-  you’ll see a dramatic change to your speeds.

The next exciting thing about 5G is not just it’s expected speeds, but it’s an improvement on latency. Typically, 4G has a 30-millisecond latency, while 5G will be as low as 1-millisecond. So, everything you do will be virtually instantaneous.

5G is the next generation of wireless technology that will deliver faster speeds up to 20 Gbps and dramatically decrease latency to be as low as 1-millisecond. By operating more efficiently through new radio wave technology, 5G is the key to opening the door to new possibilities while drastically improving our current experiences.