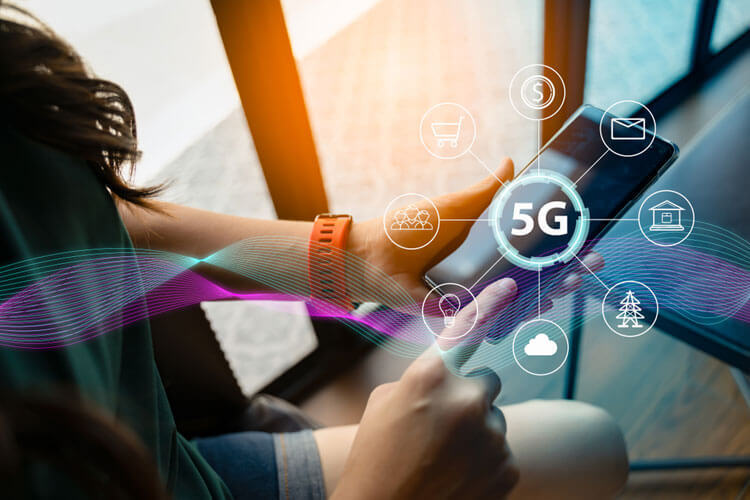 Technology is changing so quickly that unless you’re making a conscious effort to stay up-to-date it can be difficult to keep up. In no industry is this more true than the wireless industry. Since the iPhone first came out, the changes in cellular hardware and wireless functionality have been fast and furious. The next frontier? Well, everyone knows that’s 5G. What’s less well known is what exactly 5G is. Let’s take a closer look at what 5G means and how it’s going to transform the way consumers utilize wireless networks.

We’re going to start with the basics. 5G is short for fifth-generation cellular network. 5G will be leaps and bounds ahead of the current-generation technology, which we all know and love as 4G.  What many people don’t realize is that 5G is going to affect more than just cell phone service. 5G has the potential to transform the robotics industry, the internet of things (IoT), autonomous vehicles and more.

Now, let’s get into more of the nitty gritty behind 5G. 5G is technically just a set of ground rules that defines the specifics of a cellular network. Those rules include the specific radio frequencies that information is sent through and how hardware like computer chips and antennas receive and interpret those signals.

Verizon and AT&T are technically already offering 5G services in different test areas around the country. However, both of these companies are using millimeter wave technology, tech that won’t be used in the future because while it can deliver 5G-level speeds, it doesn’t have a very large geographical range. As a result, these 5G offerings are very limited in the areas that they’re available. Eventually, 5G should be just as pervasive as 4G is now.

Sprint and T-Mobile have a different plan. They have both publicly said that they plan on starting with slower speeds that can offer broader coverage. If that merger goes through, DISH Network will also be a major player. Since DISH will be utilizing T-Mobile’s wireless infrastructure for at least the first seven years, it’s not unreasonable to assume that DISH will start with the slower speed for broader coverage type of 5G service as well.

Of course, the part of 5G service that has the average consumer the most excited are the speeds that this service can offer. According to Qualcomm, one of the prominent chip manufacturers, 5G service can deliver peak download speeds of around 4.5 gigabytes per second. That means an average movie can be downloaded over a wireless network in roughly 17 seconds. By comparison, that same movie would take about six minutes over a 4G network.

Now, it is important to point out that that doesn’t mean that speeds will always be that high. Most experts predict that in the early days of 5G speeds will be more like 1.5 gigabytes per second. Still, that’s nothing to scoff at and is far faster than what 4G can currently deliver.

The more technically savvy consumer will also be excited for the second type of speed that 5G networks are going to bring to the table: latency. Latency in the context of a wireless network refers to the time it takes a command to travel through the network and register. Over a 4G network, that latency lag usually falls somewhere between 50 and 100 milliseconds. 5G networks will get that lag time down to just a few milliseconds.

The potential of less latency is huge. It means that things like virtual reality, remote surgery and remote control of autonomous vehicles will be faster and more reliable. The ramifications are tough to fully comprehend and will likely affect industries that we haven’t even considered yet.

The hype for 5G has been building for well over a year which leaves many people wondering when exactly it is that 5G services will finally come to the mainstream market. The answer, unfortunately, is a bit complicated.

AT&T is already offering 5G services in certain cities across the country. Although, as we previously mentioned, the service areas in those cities are incredibly specific because of the type of technology being used. Not only that, but most smartphones don’t yet have 5G-compatible chips. As a workaround, AT&T is offering 5G hotspots that takes their 5G signal and turn it into a wi-fi signal that normal consumers can access.

Verizon is also already offering 5G services to its customers. However, just like AT&T, those 5G signals are only accessible via wi-fi hotspots right now. Verizon has made it clear that they plan to expand those 5G services to several new cities in the United States over the coming year.

Naturally, Sprint and T-Mobile are in a more unique situation. Since these two carriers have a merger pending, the future of their 5G plans are uncertain, and may be tied to DISH Network. Both companies already have some 5G infrastructure in place. If their merger is approved, DISH will also have access to that infrastructure for the next seven years. DISH will then have seven years to create their own 5G-capable infrastructure or they’ll face a fine over over $2 billion.

All of that is to say that 5G is already here, but the rest of the market needs to catch up. That means that most consumers need 5G-capable cell phones. A task the major cell phone manufacturers are already delivering on. It’s more than likely that 5G will be the norm for most consumers in the United States by the end of 2020. If you live in a more urban area, you may find yourself with access even more quickly.

The rest of the world is following the same track. The United Kingdom is already offering 5G service in most of the country. China is bringing 5G service to some of the country at the end of 2019, with plans to expand coverage throughout 2020. Other countries like Germany, South Korea and Switzerland are not far behind.

Whether you are an early adopter or not, 5G service is going to be offered throughout the world in the very near future. All new phones are going to be 5G-capable and the market will demand 5G speeds from anyone that wants to be a major player in the wireless industry.

As with all new technologies, there are going to be kinks that need to be worked out. If you aren’t someone who enjoys the inevitable troubleshooting that comes with being an early adopter, you might want to sit this first round out. This is particularly true because of a few technical details.

All of that is to say that you could buy a 5G-capable phone now, but as 5G service becomes faster and more widespread your phone might not be compatible with the frequency that the service is being delivered on.

Soon enough 5G will be just as easy to use as 4G is now. Unfortunately, that reality is still a year or two away. For now, you’re probably best off enjoying your new 4G service and waiting for all the major players to fully transition to 5G.