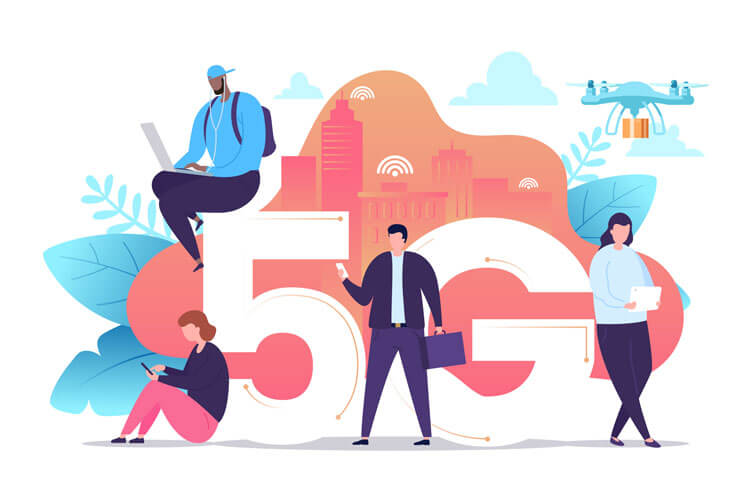 You’ve likely heard the latest buzzword in technology, 5G, come up a time or two without really understanding what it means for you as a consumer. 5G is the latest generation in wireless technology that promises to deliver insanely fast speeds with the lowest latency we’ve ever seen. 5G has been hailed as the driving power of the fourth industrial revolution, and for good reason.  It’s going to be worlds better than the 4G LTE you’re currently using, and the least impressive thing about 5G is what it will do for your smartphone.

The race towards a nationwide 5G rollout is on by the top four carriers: AT&T, Verizon, T-Mobile/Sprint and the newest wireless competitor, DISH Network. Each company has their own strategy to make their 5G network the best, and with all the hype around 5G some people have grown concerned that it may be too overhyped, especially in these early days of deployment when there isn’t even mass 5G coverage (only in a few spots in select cities) and barely any 5G capable phones or devices in the market. However back in 2010 when 4G first emerged into the market, some of the same mumblings occurred, and look all the awesome things 4G has done in regards to technology since then. It’s time for 4G to step aside and let 5G lead the new revolution. Some of the most exciting things we know about 5G are the things we don’t know. But for now, let’s talk about the things that’s got everyone eager for 5G to rollout.

Everyone is talking about how fast 5G, but just how fast is 5G fast? Let’s break down previous generations first to give you an idea of where we’ve come, and where we’re going.

5G will deliver speeds up to 20 Gbps with a latency of 1 millisecond. It means everything will be almost instantaneous- or as close to it as possible. You’ll be able to stream with a crystal-clear picture and no lag or download an entire season of your favorite show in seconds- all on the go.

With the 5G blazing fast speeds and low latency, it will finally give us the connectivity to power the Internet of Things or IoT for short. IoT powers the connection between smart devices within the world around us. With the power of 5G, IoT will get the major boost it needs to make smart cities a reality. Think about how much time you waste in traffic every day. With IoT, imagine smart sensors all around the city detecting traffic buildup that trigger traffic lights to allow more cars through. Or you get a message on your phone detailing current traffic conditions with real-time accuracy and ability re-plan your route if needed. Using data gathered from IoT devices, cities would be able to be more energy efficient. This could be accomplished a variety of ways, examples being smart lighting that turns off when no one is around or heating/cooling systems that don’t run or change temperature settings when no one is present – all things that cut back on energy and costs. The possibilities are endless and in order for smart cities to become a reality, they need the power of 5G.

We’ve all seen the movies with the self-driving cars and wished we owned one, and now you actually can. The reason why autonomous cars haven’t made their way to the streets just yet is because of latency issues with 4G LTE. You can expect about a 20 millisecond delay on 4G LTE and for autonomous cars to work, we need instantaneous speeds with virtually non-existent latency because cars need to be able to communicate with each other in real time. 5G helps enable autonomous cars because of the near instantaneous 1 millisecond latency and ultra-fast data transfer speeds.

If you thought virtual doctor visits were pretty nifty, 5G is about to make modern medicine even cooler. Imagine wearable or implanted medical devices that can send your doctor real time life saving data? Or surgeries that can be performed by doctors across the globe with extreme precision? All possible with 5G!

Since 5G delivers low latency, expect to see VR and AR applications and services get a major upgrade. So a more immersive gaming experience, or AR glasses that will change the way you see the world around you, literally.

5G is barely a real thing, yet it’s got the entire globe chattering. While we’ve got some ideas of things 5G can do, the most exciting are the applications and services we’ve yet to discover. As 5G starts to rollout near you, expect to see the world around you improved and more connected than it’s ever been before.