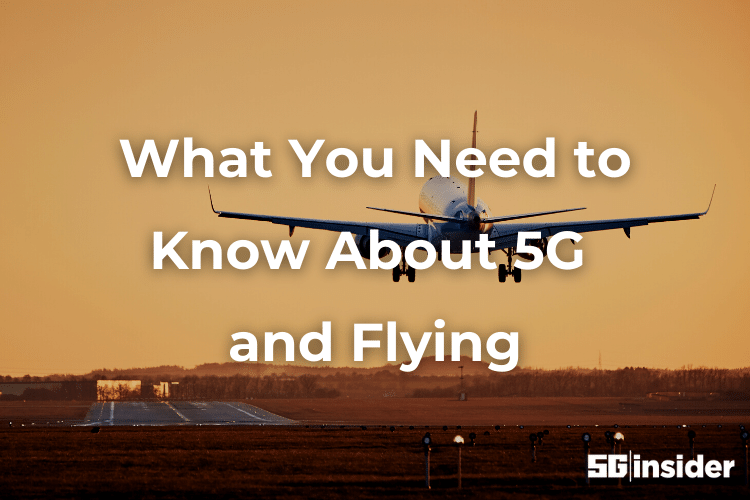 If you’ve traveled via airplane over the last few decades, you know it’s a strict rule to keep your electronics off during takeoff and in “airplane mode” while in the air. While your phone may not be powerful enough directly to interfere with the aircraft, your phone, plus passengers’ phones or devices and nearby cell towers, can cause some interference. There’s been a lot of recent news stories surrounding 5G and airplanes, but what’s it all really about? Let’s review.

Pilots will use radio altimeters when approaching airports with poor visibility (ex., fog). These landings are determined on a minimum height that the pilots can see the approaching lighting system, also known as the decision height. If the pilots don’t see the lights or runway, they must execute what’s called a missed approach and wait for weather conditions to get better, and if they don’t, find another airport to land at.

Low-visibility approaches require pilots to use radio altimeters for guidance on how high they are since they won’t have any visibility until right before touchdown. Aircrafts conducting automatic landings in low visibility also rely on radio altimeter data. Radio altimeters also have digital height callouts (ex. “50, 40, 30, 20, 10”), helping the pilot better understand where they are.

All of this being said, when AT&T and Verizon announced that they would turn on their 5G wireless communications via the C-band spectrum, the alarm bells in the airline industry sounded off. There was a study conducted in 2020 that showed 5G transmissions in the C-band spectrum affect radio altimeters on aircrafts and that there are “major risks” that these systems “will cause harmful interference to radar altimeters on all civil aircraft.” These radio altimeters operate in an adjacent spectrum to 5G C-Band and are susceptible to interference.

The Federal Aviation Administration (FAA) sees this as a significant safety issue. It is immediately building a process to determine rules for when an airport is near 5G C-band towers. It’s important to note that the FAA does not take issue with 5G devices, just the 5G C-band towers.

What does this mean in real-life applications?

You’re flying to Houston, Texas, and your plane is set to land at Houston International Airport (IAH), but there’s quite a lot of fog on the runway, and the pilot can’t safely land. Usually, your pilot could conduct a low-visibility approach using radio altimeters. But there is a 5G C-band tower near IAH. The FAA has published a NOTAM (Notices to Air Missions) prohibiting this type of approach due to the tower’s interference with the plane’s radio altimeter. Your aircraft is then told to hold from landing until the weather improves, it doesn’t, and you’re forced to land at Hobby Airport.

This is a very likely scenario to occur over the next few weeks and months, but this is why everyone in the aviation industry is sounding the alarm over 5G C-band towers.

“There are ways that 5G can be deployed while maintaining our high level of aviation safety, and time is running out for the wireless industry and the broader aviation community to work together on implementing mitigations that will ensure that every passenger and cargo flight arrives safely without severe disruptions to aviation operations,” said Capt. Joe DePete, president of the Air Line Pilots Association, representing pilots at Delta, United, and smaller carriers.