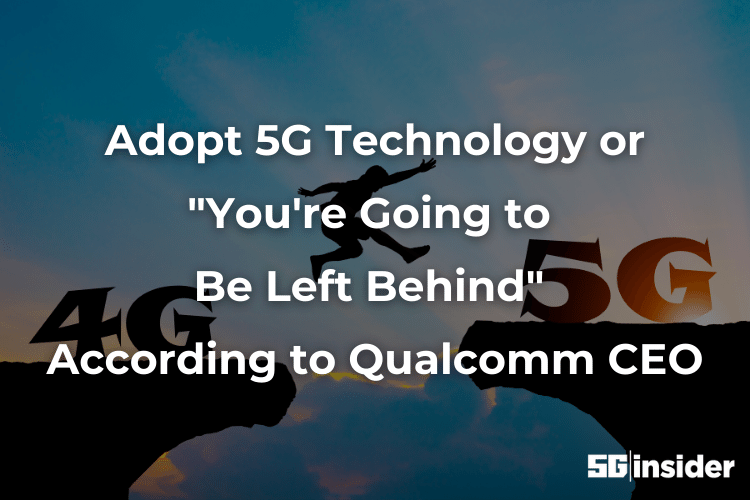 Qualcomm Technologies, Inc. CEO Steven Mollenkopf spoke candidly about 5G adoption in a video interview at Brainstorm Tech. Mollenkopf noted that 5G could dramatically disrupt the consumer and enterprise spaces, with Qualcomm on the forefront of developing case uses for 5G through its partnerships with companies like Zeiss, Siemens and Bosch, and consumer 5G device OEMs.

As the world demands more data for things such as smart devices, self-driving cars, and even faster streaming capabilities, the cellular industry is trying to find new ways to keep up with this demand. “5G allows the operator to access [wireless]data at about [a]30th of the cost,” Mollenkopf said. “It also allows access to new bands, which gives [the operator] tremendous ability to provide services to the consumer.”

It’s known that consumers are excited about the increased data speeds; 5G speeds will significantly impact enterprise enablement. Unlike in years past when new generations of wireless technology would debut, and it would be slow to make its way across the globe, that doesn’t seem to be the case with 5G. Mollenkopf said, “It’s launching worldwide,” and Qualcomm has played a significant role in that.

According to Mollenkopf, 5G has been vital in making digitization happen, and that “5G was designed purposefully to allow [this digitization] to occur.”

5G connects things in ways that we’ve never been able to do in the past. For example, 5G can make manufacturing more efficient by improving quality control, effectively optimizing operations, and avoiding costly downtime while improving product output and quality. The manufacturing sector is just one of many that will benefit from 5G connectivity.

5G is ramping up faster than 4G ever did, and Mollenkopf made sure to say that 5G is the future. He warned, “If you don’t have a good 5G deployment strategy…you’re going to be left behind.”