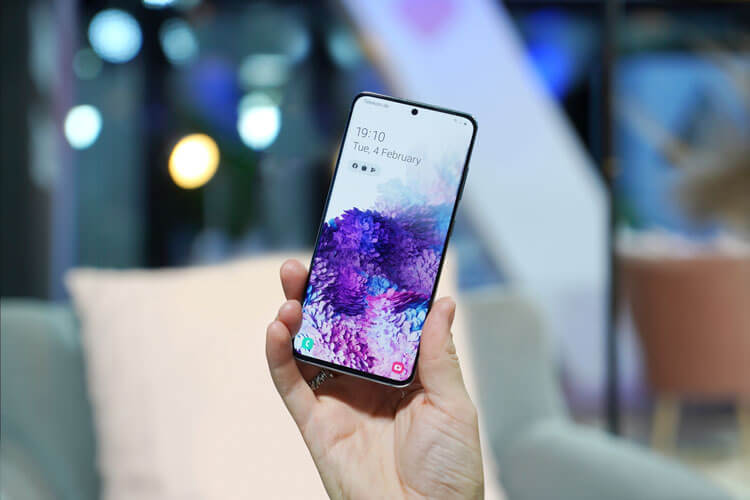 As 5G networks begin to roll out across the nation, early adopters and tech-enthusiasts alike are anxious to try out these uber-talked about 5G speeds. 5G promises to deliver the highest speeds we’ve ever seen coupled with an ultra-low latency that will be about 20 times faster than the 4G LTE networks we know and use every day. The downside? You can only access these 5G speeds through a 5G capable device.

5G phones are expected to be more expensive than the phones we’ve seen thus far, but that’s because of the special hardware needed to access the various carriers’ 5G networks. However there’s hope with any new technology while it’s expensive when it first comes out, as the tech becomes more mainstream prices will surely drop. Now that 5G has started to make its grand debut across the U.S. and 5G phones are making their way onto the marketplace, there are five 5G phones we’re particularly excited about.

Dubbed as the “mobile revolution” by LG it’s one of their first 5G phones. With this handy device, you’ll be able to view 4K movies on the go, with 5G gaming, you can take on multiple players across the world. If you’re someone interested in photography, this phone has five different lenses to capture both still images and moving footage perfectly. With 6.4” OLED FullVision Display, you’ll get high-quality and crystal clear downloads, uploads and seamless streaming all with insanely fast speeds. Some other features that we think are pretty cool are the Boombox Speakers, 4,000 mAh battery & cooling system (no need to worry about 5G draining your battery) and the coolest bit, the Qualcomm® Snapdragon™ 855 Processor. This processor is what delivers that 5G performance.

The LG V50 ThinQ is available only to customers on Verizon and Sprint networks. The phone retails at $999.99 and depending on your carrier, monthly payment options are available.

This phone is an updated version of the OnePlus 7 Pro 5G model and is worth the buzz. This beefed up phone has a 90 Hz Fluid Display for a fast and seamless viewing experience. True to their origin, the phone is designed with classic McLaren design elements that are featured in McClaren luxury sports cars. With three independent cameras, they all work in synchrony to produce amazing pictures and videos with every single click. The main camera is 48 MP, 3X optical zoom and 117 degree ultra-wide angle so you won’t ever miss a moment. The phone is outfitted with a Qualcomm® Snapdragon™ 855 Processor which powers the 5G speeds, alongside UFS 3.0 storage 258GB of memory and RAM Boost of 12 GB. Some would worry about all of these features draining the battery, but this phone features Warp Charge 30T, giving  you the ability to charge your phone 23% faster with lightning speeds.

We like this phone because it’s one of the more affordable options retailing at $899.99 out there for those looking for a 5G phone, without breaking the bank. It’s exclusive to T-Mobile so if you want it, you’ll need to be a T-Mobile customer to use it.

THe Samsung Galaxy Fold 5G has us excited because it’s the world’s first foldable phone. We’ve had slider phones, we’ve had flip phones but nothing like a foldable phone! This Samsung original features a foldable Infinity Flex Display. The 7.3 inch Dynamic AMOLED display is made of a unique polymer material paired with the big screen makes this not only the most unique design, but the largest Galaxy smartphone screen to date. The phone “folds like a book” so it’s easy to use and can fit just about anywhere. This smartphone has six cameras, allowing users to capture stunning videos and photos and as an extra added bonus, the Infinity Flex Display can be doubled as a massive viewfinder. While the display is super nifty, the mechanics of the phone are also worth discussing. The phone features 12GB of RAM memory allowing you to do it all, plus 512GB of built-in storage so you’ll never run out of room. The dual battery allows users to charge smarter, with the capacity to recharge without overcharging and intelligent battery management that puts apps on idle so you’re not using, on reserve.

The highly anticipated Samsung Galaxy S20 series has us excited because all three phones are outfitted with 5G connectivity. The series starts with the S20, which is the smallest of the phones with a 6.2-inch screen, followed by the S20 Plus 5G with a 6.7-inch screen and the biggest screen belonging to the suped up S20 Ultra 5G at a whopping 6.9 inch screen. Each phone is outfitted with a Quad HD + Dynamic AMOLED 2X Infinity-0 display and is 5G powered with a Qualcomm® Snapdragon™ 855 Processor. Each phone also has a Ultrasonic Fingerprint Sensor and a pretty snazzy camera. The Single Take AI is what Samsung dubs burst mode “on beast mode.” The amped up AI captures up to 10 seconds of a variety or still and video formats in a single click so you get the best shot, every single time. The S20 and S20 Plus have 3X Hybrid Optic Zoom, while the S20 Ultra has 10X Hybrid Optic Zoom, both features coupled with the Super Resolution Zoom and advanced AI let users find shots that they didn’t even know were there. It’s smartphone photography on the next level! Because all of these phones are powered by 5G, Samsung amped up the battery power with the Wireless Power Share feature, so users can charge up fast and without being bogged down by cords!

The series starts out at $999.99 and phone availability is dependent on which carrier you choose.

While Apple hasn’t released any official details regarding the iPhone 12, rumors are circulating about the highly-anticipated device. All we can do is speculate for now, but we’ll share some features that we “think” the phone will have according to MacRumors.

According to the website, there will be four phones in the lineup varying from 5.4”, 6.7” and 6.1” sizes, all with OLED displays (goodbye LCDs)  and a revamped design. 2020 will be the first year that Apple debuts an iPhone with 5G connectivity, so not only will it be one of the world’s most favorite phones, but also outfitted with the fastest network technology that’s ever existed. Apple plans on transitioning back to Qualcomm modem chips instead of Intel chips. All four iPhones are set to feature  Qualcomm’s X55 5G modem chip- which is super exciting. The chip offers peak download speeds of 7Gb/s and 3Gb/s upload speeds. These speeds are dependent on the network though, so something to keep in mind. Because carriers are rolling out their 5G networks on both mmWave and sub-6GHz technology, Apple may offer phones that connect to just the sub-6GHz spectrum- but 5G is still in its early stages and by the time of launch the U.S. would have laid the framework for most of their 5G networks.

The website also notes that the design could follow the iPhone 4 with the squared-edged stainless steel frame and continue to use the front and back glass for the body of the phone. It’s also rumored that the iPhone 12 could feature a switchable 60Hz/120Hz refresh rate. The phone will also possibly feature an A14 chip, making it faster and more efficient.

As 5G becomes the new norm in wireless networks, so will 5G enabled phones. These latest and greatest phones will only get better as time goes on and we’re excited to see what smartphone manufacturers have in store for us as this exciting technology evolves!