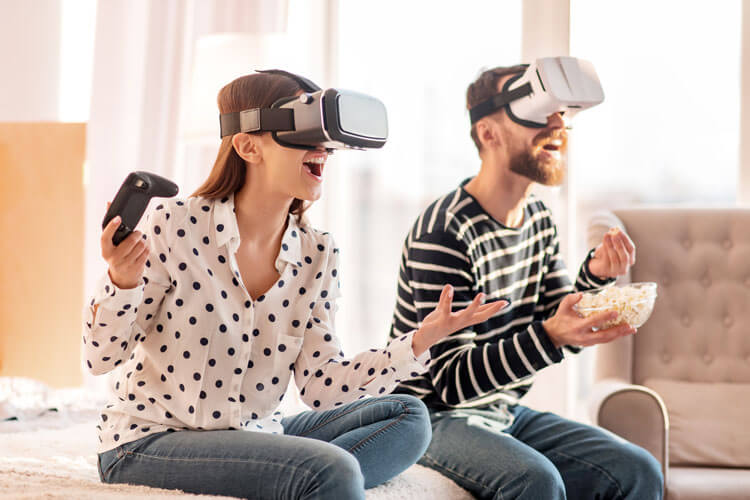 If you’re a huge gamer, or lightly dabble then it’s likely you’ve heard about 5G and how 5G will transform the gaming world. 5G is going to have a huge impact on the gaming community, especially for those who play on a cloud-based system.

5G will give gamers upload and download speeds of 20 Gbps instead of the 10 Gbps we currently see with 4G. These fast speeds for gaming will change how we play virtual reality (VR), augmented reality (AR), and cloud-based gaming. Multiplayer gaming will see major improvements because you’ll be able to add more users while experiencing a faster connection and a better cloud-based gaming experience.

VR and AR can be somewhat confusing if you’re not familiar with their differences. VR is an artificial computer-generated simulation of a real-life environment or situation. A headset is worn, and your vision and hearing are stimulated to trick your brain into thinking you’re experiencing what you’re see on the screen. Some VR games are played with controllers that will vibrate to match the action of what you’re seeing and hearing in your headset.

AR, on the other hand, is done through layers of computer-generated augmentation set on top of an existing reality to allow the user to interact with it. For example, a 3-D walk-through of a house and how you’re able to click through to see each room, that’s AR technology at work.

VR and AR gaming provides users with the ability to be fully engaged in their gameplay with minimal interruption from the outside world. Currently, most gamers play their systems on a large TV, phone, or computer, while never being able to entirely escape the real world and immerse themselves in the game. With the technology advancements 5G will bring, we’ll see better and faster ways to play video games.

AR and VR technology, with the help of 5G, can propel us forward in the video game world, making users feel fully immersed in the gameplay. Currently, VR headsets are connected to the system via wires, never allowing the user to be completely wireless. With 5G, VR headsets will have the capability to be wireless and smaller, making them easier to transport anywhere. The wireless capability means more mobile gameplay, no matter where you are.

Multiplayer gaming is expected to grow with the rollout of 5G. That’s because gamers won’t have to worry about the pesky lag that comes with multiple gamers in one game streamed to your system using the cloud. This will solve the ongoing question of “who has the fastest internet speed” when trying to game with friends because everyone will see better speeds for gaming, regardless of where you are. You could be on the other side of the world and still experience the same high-speeds and low latency as other players- if there is 5G available!

Good gameplay sometimes stems far beyond the game and system itself. You can have the newest games and system, but if your internet connection is weak, that creates a lag and makes the experience less enjoyable. Playing video games with high latency can frustrate any gamer, especially if the game is streamed to your system, meaning you didn’t buy a physical copy of the game. 5G will is designed to cut out the latency so gamers can experience smooth and responsive gameplay. When playing cloud-based, first-person games like PUBG or Fortnite, you want to be able to give your character a command and see that command in action instantly, because your success in the game is contingent on how fast you act. With 5G, you’ll notice a significantly better gaming experience because that lag time will be so low due to 5G’s low latency, every action is as instantaneous as it can get due to the one millisecond latency with 5G, compared to an average of 10 milliseconds with our current 4G connection.

5G will open up the door for so many new and exciting things in the gaming community. Faster internet speeds, wireless VR, and multiplayer gaming scratch the surface of what we can expect with 5G coverage. As more systems hit the market in the next few years, there is no telling what game developers and system manufacturers produce.