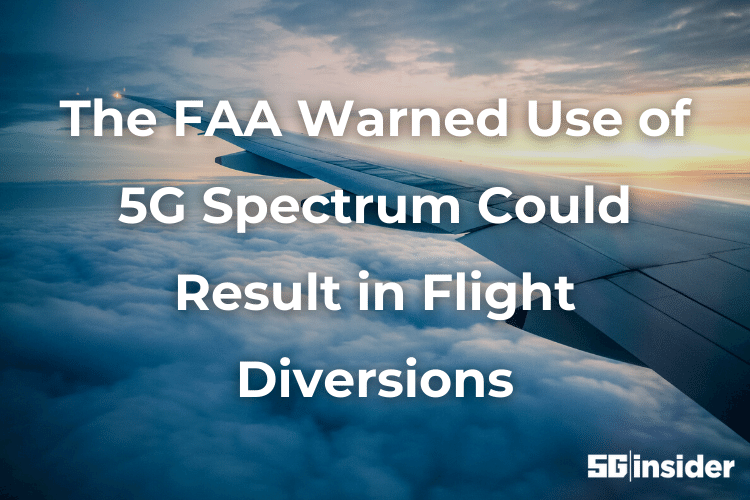 The U.S. Federal Aviation Administration (FAA) warned on Tuesday that interference from the planned use of 5G spectrum could potentially cause flight safety risks resulting in in-flight diversions.

This is not news to anyone, as the FAA has raised alarm bells recently regarding the interference of 5G with aircraft electronics. Both AT&T and Verizon have paused any commercial launches of 5G on the C-band until January 5th amid the FAA’s concerns.

The FAA directive said the “unsafe condition” posed by the planned use of 5G required immediate action before the January 5th deployments “because radio altimeter anomalies that are undetected by the aircraft automation or pilot, particularly close to the ground … could lead to loss of continued safe flight and landing.”

It’s not that 5G and aircrafts can’t coexist together, they can. The FAA said in a statement that the “expansion of 5G and aviation will safely coexist.” The agency added that the two directives “provide a framework … to gather more information to avoid potential effects on aviation safety equipment.”

The White House, Federal Communications Commission (FCC), and FAA remain in close contact regarding the issues and are working on outlining any limitations with a series of notices in the next few weeks.

On Tuesday, the FCC said it “continues to make progress working with the FAA and private entities to advance the safe and swift deployment of 5G networks … We look forward to updated guidance from the FAA in the coming weeks that reflects these developments.”

It’s unclear yet what aircrafts would be affected, the FAA said that notices would “be issued, as necessary, to state the specific areas where the data from a radio altimeter may be unreliable due to the presence of 5G C-Band wireless broadband signals.”

Verizon and AT&T said on November 24th that both carriers would adopt various safety measures over the next six months to limit any interference. But the aviation industry said that those measures weren’t enough.

Verizon said in a statement, “there is no evidence that 5G operations using C-band spectrum pose any risk to aviation safety, as the real-world experience in dozens of countries already using this spectrum for 5G confirms,” and added it was confident the FAA ultimately will conclude C-Band 5G use “poses no risk to air safety.”

The company added, “on track to launch 5G using C-band next month and to reach 100 million Americans with this network in the first quarter of 2022.”

Both carriers said in November they would take “additional steps to minimize energy coming from 5G base stations.” The FAA said under 2020 FCC rules “base stations in rural areas of the United States are permitted to emit at higher levels in comparison to other countries.”